On the morning of March 11, I stood behind the door of my apartment holding a backpack of overnight clothes and breathing heavily through a mask. Moments later, I heard the knock: two EMTs in PPE, who escorted me downstairs to a waiting ambulance. My mail carrier, busy in the lobby, was the only witness to my departure. As we passed her, a look of shock flashed across her face. I imagined her thoughts forming: This parade of masks, and gloves, and medical equipment – is this it? Is this the virus? It felt like the establishing shot of a movie: the infected being removed from their homes.

Just hours before, I had learned that I was positive for the novel coronavirus. The doctors thought I needed to go to the hospital. The night before, I had spent terrified hours wracked by chills so intense I thought my teeth would break. Five days earlier, on a Friday evening, I had developed a mild fever, which worsened. Over the weekend, self-isolating and confused, I had veered between moments of feeling fine and wondering if whatever it was had gone away, to being unable to do simple tasks like unloading the dishwasher without needing to lie down.

The following Monday morning, I called the health center at Stanford University, where I am a fellow. Over video, the doctor said she thought she could hear pneumonia as I spoke. Given my status as a diabetic, she was concerned. She ordered chest X-rays and tests for flu and COVID-19, which she was able to do only because Stanford had developed its own test. I was lucky – I had not been to Wuhan or Italy, so I did not qualify for a public test. I had only been, I told the doctor, to a friend’s wedding in Florida the last week of February. Like thousands of other Americans, I had moved through packed airports and sat on overbooked planes (diligently handwashing and wiping down my seat, which experts had said would keep us safe). Everywhere that weekend in Miami, there were crowds, and somewhere during that time, the virus had passed silently between us.

I thought about how strange it was that a tiny virus that had long lived quietly in a bat in China should have, within a matter of months, crossed an ocean and lodged itself in my lungs.” 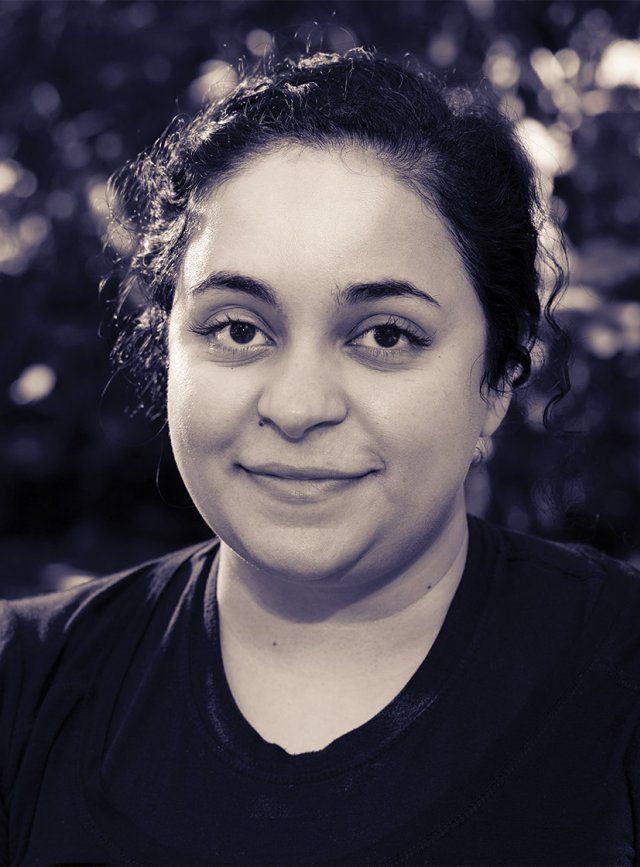 After all, February and early March was a very different time in America. The phrase “social distancing” was not yet in the public lexicon. Widespread community transmission of the virus seemed like a threat on the horizon; we did not know that it was already happening here. The ambulance carrying me drove through a bustling, business-as-usual San Francisco. Outside UCSF Medical Center, I lay strapped to a gurney while the staff debated whether I should be put into a tent recently set up for COVID-19 testing or go into the hospital building. People passed by with their lunches, Get Well balloons, and referrals. Lying there, I felt as though I was occupying a different time and space – as if I were some horrible harbinger of the future, an infected creature unnoticed in the midst of normalcy.

It would be weeks before the first stories trickled out of New York about how the coronavirus attacks every part of the human body, how it can necessitate amputations, how it can cause heart attacks or strokes. The little I thought I understood about the virus would turn out to be wrong; inside the hospital, in a negative-pressure room (which I had only previously heard about in coverage of Ebola), I told myself that young people rarely got seriously sick and were even less likely to die, that I was surely there only overnight. Instead, almost two weeks would pass before I went home.

An odd thing about COVID-19, in my experience, is that during the day, you feel almost fine, but at night, like a monster of legend, the virus roars to life. In the daytime, I asked my doctor about being discharged, or I pored over studies from Wuhan to try and anticipate the virus’s course. But almost exactly at 5 p.m., my temperature would begin to rise. I’d be hit by terrible chills, and my ability to think anything beyond the most basic thoughts would fall apart. Life was day or night, normal or feverish. I didn’t realize, either, exactly what was happening to my lungs, even as my blood-oxygen level progressively deteriorated. I went from occasionally needing supplemental oxygen to being hooked up to the tank constantly; from two liters to six liters to a prophylactic move to the ICU so I could be ventilated immediately if necessary. To keep me calm, the doctor turned the monitors away so that I couldn’t see the numbers. Mostly, when I contemplated my breathing, I thought about how strange it was that a tiny virus that had long lived quietly in a bat in China should have, within a matter of months, crossed an ocean and lodged itself in my lungs. I spent three days in the ICU, immensely fortunate that I never needed ventilation. I then spent another five days on a newly created COVID-19 ward, waiting for the fevers to gradually diminish and to be able to breathe “room air.”

The experience of a COVID-19 patient is one of intense loneliness and isolation. For their own protection, doctors and nurses can’t spend extended amounts of time in the room with you, so they do as much as they can in a single visit. This means hours of isolation in the negative-pressure room. Everyone you see is in layers of PPE; no one touches you ungloved or unmasked. No one you love is there to comfort you. You know that if you die, you will be without family or friends around you, and if you’re on a ventilator, you will not even be able to say goodbye. I longed, very desperately, for my mother to hold my hand – for the very specific feeling of her cool palms. I often fell asleep dreaming of it.

I invoke the names of my nurses as if they were saints, which to me they were: Kuanie, Steve, Selena, Taik, Stephanie, and so many others who tended to me through fever and fear.”

And yet, I was constantly struck by the extraordinary lengths to which the hospital staff went to establish a human connection through the isolation and layers of protection. These attempts may have seemed like small gestures, but they were so meaningful to me that they served as a psychological balm, a true feature of my treatment. The nurses brought me my favorite tea on their runs to Peet’s. They gathered an array of lotions for me to sample (as if I were in a department store) when my skin grew irritated from the medical tape. They brought me magazines from their own homes when I had nothing cheerful to read. They ordered elaborate lunches to try to get me to eat, as I’d lost my senses of taste and smell. They called to check on me even after I’d been moved to another ward. Over my complaints of tiredness, they gently walked me around the room to keep my lungs working; this particular intervention, I believe, helped keep me off a ventilator and may have saved my life. They wiped the sweat off my body in the early hours of the morning after my fevers broke, and they counted my breaths as I slept. I invoke the names of my nurses as if they were saints, which to me they were: Kuanie, Steve, Selena, Taik, Stephanie, and so many others who tended to me through fever and fear. Even the kind people who disinfected the COVID-19 ward daily – surely the least desirable assignment in the hospital – asked if I was OK, if I needed anything. It is an odd and painful thing to know that you are literally a biohazard, but they did their best to make me feel like a human. I came to see the work that the nurses, doctors, technicians, and staff did as the closest thing to radical love – caring for someone you do not know, in their moment of sickness. Doing whatever you can to ease their discomfort, no matter how small, even as they pose a risk to you.

In late March, I was discharged into a San Francisco that felt like a different city: an empty hospital lobby, silent streets. At home, I took my first long shower in weeks. Then I stood at my open window and breathed in lungfuls of fresh air – thankful to be alive, dazzled to have made it. I survived due to an alchemy of intersecting factors – the care provided to me, including the wise monitoring and foresight of my many doctors, including Dr. Abhisake Kole and Dr. Erin Yao-Cohen at UCSF and Dr. Robyn Tepper at Stanford; matters of personal physiology; and, importantly, a range of socioeconomic privileges.

Over the long, continuing period of my recovery, that last feature – privilege – has painfully taken up more and more space in my mind. Daily, hearing the accounts of others who are sick with the virus, it seems like the defining feature of my experience. Illness often feels like a private thing – yet being sick with COVID-19 fully reveals that it is a social matter too. It’s been clear to me that my experience was an exceptional one. Others have been unable to access tests or have been turned away from hospitals when they were as sick as or sicker than I was. Hospital staff have been infected for want of PPE. I have received months of thorough and thoughtful aftercare at Stanford, so I have not been left to navigate the often confusing and stressful post-COVID landscape of my health alone; that’s something I am able to do only because I have insurance, which also allowed me to deal with the considerable hospital bill.

I was able to self-isolate and social distance, and I did not have to work in unsafe conditions or risk exposure to the virus in order not to lose my income. I am not unhoused, or incarcerated, with very little agency when it comes to staying safe. While I share the same chronic illnesses that many other Americans of color disproportionately suffer from and that leave us vulnerable to the virus, I did not share a lack of access to treatment for those conditions prior to my infection, increasing my chances of survival despite them. I was not at the mercy of inequalities that have left Americans of color – in particular, Black and Indigenous Americans – to die at rates disproportionate to that of white Americans.

As I write this, the streets of San Francisco are alive again – not with commerce but with protest, as Black Americans yet again demand the basic right not to die from state violence. We are at the intersection of two pandemics: the virus that came to us and the violent inequality that we have maintained and cultivated over centuries. The coronavirus is like a mirror: It reflects that inequality, in its exact forms and contours, right back at us. It has taught us the extent of our connections in its transmissibility and the extent of our responsibilities in the public health measures we have had to take. We can no longer ignore that what happens to our bodies – and whether we survive – is a matter of the society we shape, and not just our individual selves.

F.T. Kola is a Wallace Stegner Fellow at Stanford University, where she is working on her first novel.